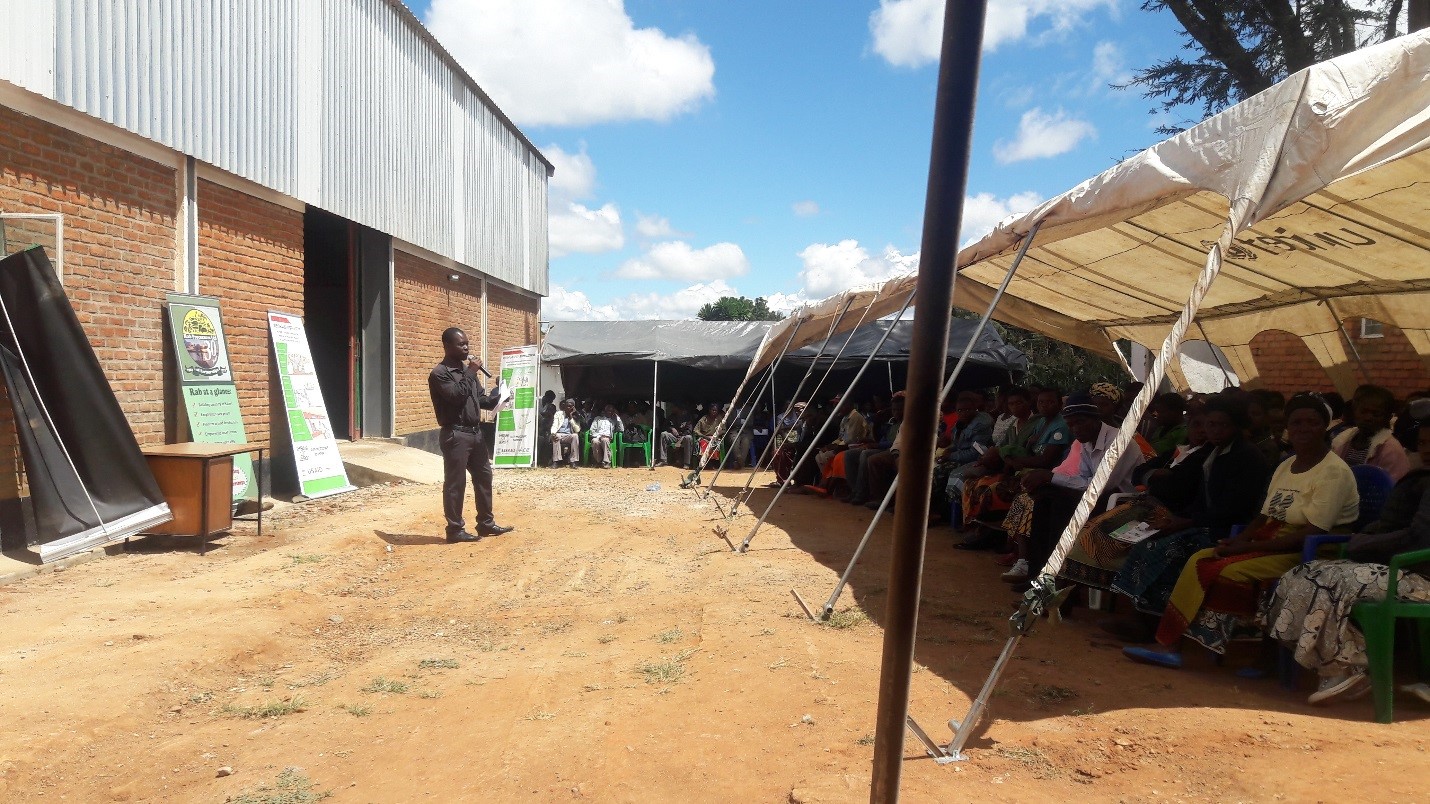 In March 2015, through a competitive solicitation process, Rab Processors was awarded a matching grant (PI-SMOG-Mal-01-03 Rab) of $732,953 by USAID’s Feed the Future Partnering for Innovation (FTF P4I) activity which is ending September 30, 2017.

On Wednesday 12th April, 2017 USAID presided over the opening of the Dedza Kulima Gold warehouse, also known as Dedza SRAM (Smallholder Rural Agro-commodity Marketing and Storage Facility). This is one of the three SRAMs built in Dedza, Kasungu and Mchinji, operated by RAB processors. The Agricultural Commodity Exchange is raising awareness about the SRAM services to the farmers around the SRAMs, implementing the Warehouse Receipt System and operating Market Information Points at each site.

Speaking about the function, a representative from USAID, Mr. Fenton Sands said that USAID is committed to support initiatives that have the potential to uplift the welfare of small scale operators such as farmers and traders. Sands also mentioned that it is in line with Partnering for Innovation objectives that USAID works hand in hand with partners such as RAB Processors, one of the major buyers and processors of grains such as soy, maize and groundnuts in Malawi. He expressed hope that farmers would benefit from the facility as it offers them access to professional storage, market opportunity and also access to purchase good quality agro inputs at affordable prices through the Kulima Gold shops located adjacent to the warehouses. “In my next visit I will be interested to hear testimonies of farmers who will benefit through using this facility as a selling point or storage facility.”

The event was held under the theme “Aggregating on Certified Storage Key to Better Prices”. The General Manager- Commercial for RAB Processors Limited, Mr. Bashir Sama explained that theme was deliberately chosen to let farmers understand that aggregation under professional storage will guarantee quality and give them better leverage on price bargain. “We will offer very competitive prices to farmers this season. Farmers who want to sell later will be issued a warehouse receipt that will give them an option to access finance to boost their agribusiness activities.”

Speaking earlier at the same function the District Agricultural Development Officer for Dedza Mr. O. Chapotoka expressed his appreciation to USAID for considering his district to be one of the beneficiaries of the SRAMs. Chapotoka indicated that farmers in Dedza produce a lot of soya, sugar beans and maize for which they struggle to find proper markets. He then advised farmers to make use of the facility to get better prices and also as storage facility to reduce post-harvest loses.

The Programs Coordinator from the Agricultural Commodity Exchange for Africa, Mr. Jacob Kumwenda encouraged farmers to monitor prices closely at the market information point that ACE has opened at the same warehouse. He informed the gathering that ACE is interested in linking the farmers directly to the markets hence the partnership with buyers like RAB Processors.

To date, close to 8,000 smallholder farmers are using the SRAMS storage services