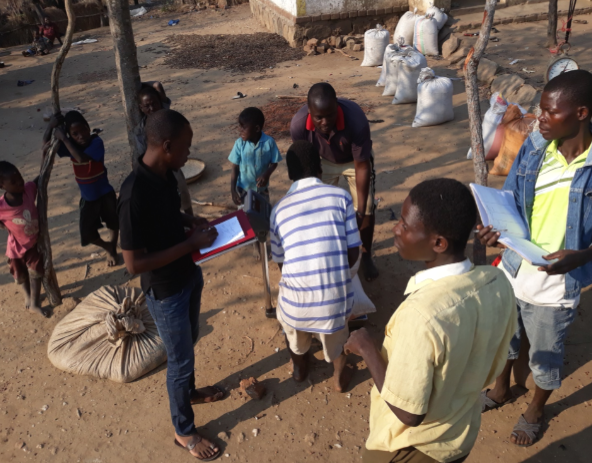 THE SECRETARY THAT MATTERS
(0  comments)

To be a manager and to be a Leader are two different things. A Manager knows how to manage resources whilst a Leader has a desire to achieve a goal with the resources at hand. This is what Masautso Lodsan, Secretary of Chitimbe Cluster, is all about.
Chitimbe Cluster is located in Blantyre and has a membership of over one hundred members, of which approximately 70% are female and 30% are male. Despite being located in a remote and mountainous area, South west of Blantyre, bordering Chikwawa district to the south and Mwanza district to the west, Chitimbe cluster is one of the few organized FOs in the Blantyre district.
During the 2017 marketing season Chitimbe Cluster managed to aggregate, hire a truck and collectively sell red pigeon peas in Blantyre. The FO sold at 45 MWK per kg, due to poor post-harvest handling, however they decided to learn from their mistake and were determined to not face the same issue in the 2018 marketing season. Although some members of Chitimbe were discouraged with the low prices obtained for their commodity in 2017, Mr Lodsan was determined to encourage his FO and ensure that they found a better market for the 2018 pigeon peas.
The Secretary contacted the ACE Rural Marketing Advisor for Blantyre, Phillip Mwale, asking for his FO to be trained on the ACE Marketing School. The ACE Marketing School is a three day training aimed to give farmers and in-depth understanding of the services ACE offers, with the hope of increasing the adoption of these services. Specifically it looks at: Market Information, Trade Facilitation, the Warehouse Receipt System and other associated topics such as post-harvest handling and collective marketing. In March 2018 the Chitimbe Cluster received the training.
When planning for the 2018 marketing season, Chitimbe Cluster projected to produce and collectively sell 30 metric tons of pigeon peas, however, due to poor rainfall in the area, they only managed to produce 7 metric tons of peas. Furthermore, as has been the case for the past two years, the pigeon pea market has not been good, and the market price began at 40 kwacha per kg FCA in June, rising to 50 kwacha per kg FCA in August.
However Mr. Lodsan was not disheartened by this. He encouraged his fellow FO members to aggregate whatever tonnage they had, kept updating the Blantyre Rural Marketing Advisor on the aggregation progress and inquiring with him on the market trends. Mr. Mwale was able to find a buyer who offered to buy at 60 MWK per kg, this was 10 kwachas above the local market price. Chithimbe Cluster sold a total of 7 metric tons, of which Mr Lodsan himself contributed 3.5 metric tons. The total tonnage was aggregated from 11 different people (10 males, including Mr Lodsan and 1 female).
They were the first people to manage to sell pigeon peas as high as 60 kwacha per kg. With the profit the members of Chitimbe Cluster were able to procure some maize. Chitimbe Cluster is planning to boost its business by cultivating more pigeon peas and soya come the 2019 marketing season.